Static keyword in C++ can often be a cause of confusion for many people because of its varied use cases. If you are one of them, hope this article helps you alleviate it.

In C++, static is used within three contexts : class, function and translation unit. And in each of these three contexts, they serve different purposes.

Within a class context, a class variable or a class method can be defined as static.  A variable or a method declared as static is solely owned by the class. The class instances (class objects) do not get their own copy of the static members. So there is always only a single copy of a class’s static members which is in contrast to the other members of the class (each class instance gets its own copy of these members). Everyone with access to the static member always works on this single copy.

The only way to initialize a static variable is outside of the class using the following construct.static_variable_type class_name::static_variable_name = value. If you define your class in a header file (“.h” ) file, you should not add the initialization line for static variables in the same file. It should only be added in a (“.cpp”) file.

A static method, as long as it is declared as public (which is usually the case), can be accessed anywhere in the program using class_name::static_method_name. Note that a static method can access only the static members of  a class. You cannot use it to access non static members because of obvious reasons (Come on!! you can figure out the reason yourself!).  Static methods can be defined within the class or outside of a class just like other class methods. Another important point to note is that a static method do not have the “this” pointer associated with it as it is not attached to any object.

Before reading the next two uses cases of static, I highly recommend you to go through my other article that discusses scopes and linkage in C++. You might not fully understand the below two use cases otherwise.

Within In a function context, a local variable declared as static will retain its value in memory until the end of the program.  Note that the variable can still be accessed only from within its scope. 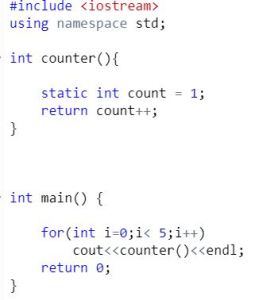 Similarly, as you can see in the below example, a local static variable declared within a loop retains its value across multiple iterations of the loop. 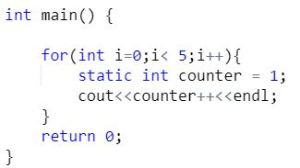 Within a translation unit context,

As discussed in the other article (here), a translation unit is the basic unit of compilation in C++. A global variable (which is available throughout the translation unit right from its point of declaration) has an external linkage by default and it is visible to the other translation units within the project.